7Who in the days of his flesh, when he had offered up prayers and supplications with strong crying and tears unto him that was able to save him from death, and was heard in that he feared;

8Though he were a Son, yet learned he obedience by the things which he suffered;

9And being made perfect, he became the author of eternal salvation unto all them that obey him;

10Called of God an high priest after the order of Melchisedec.

11Of whom we have many things to say, and hard to be uttered, seeing ye are dull of hearing.

12For when for the time ye ought to be teachers, ye have need that one teach you again which be the first principles of the oracles of God; and are become such as have need of milk, and not of strong meat.

13For every one that useth milk is unskilful in the word of righteousness: for he is a babe.

14But strong meat belongeth to them that are of full age, even those who by reason of use have their senses exercised to discern both good and evil.

1For every high priest taken from among men is ordained for men in things pertaining to God, that he may offer both gifts and sacrifices for sins:

2Who can have compassion on the ignorant, and on them that are out of the way; for that he himself also is compassed with infirmity.

3And by reason hereof he ought, as for the people, so also for himself, to offer for sins.

4And no man taketh this honour unto himself, but he that is called of God, as was Aaron.

5So also Christ glorified not himself to be made an high priest; but he that said unto him, Thou art my Son, to day have I begotten thee.

6As he saith also in another place, Thou art a priest for ever after the order of Melchisedec. 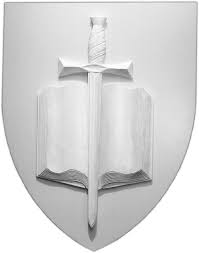 11Let us labour therefore to enter into that rest, lest any man fall after the same example of unbelief.

12For the word of God is quick, and powerful, and sharper than any twoedged sword, piercing even to the dividing asunder of soul and spirit, and of the joints and marrow, and is a discerner of the thoughts and intents of the heart.

13Neither is there any creature that is not manifest in his sight: but all things are naked and opened unto the eyes of him with whom we have to do.

14Seeing then that we have a great high priest, that is passed into the heavens, Jesus the Son of God, let us hold fast our profession.

15For we have not an high priest which cannot be touched with the feeling of our infirmities; but was in all points tempted like as we are, yet without sin.

16Let us therefore come boldly unto the throne of grace, that we may obtain mercy, and find grace to help in time of need.

1Let us therefore fear, lest, a promise being left us of entering into his rest, any of you should seem to come short of it.

2For unto us was the gospel preached, as well as unto them: but the word preached did not profit them, not being mixed with faith in them that heard it.

3For we which have believed do enter into rest, as he said, As I have sworn in my wrath, if they shall enter into my rest: although the works were finished from the foundation of the world.

5And in this place again, If they shall enter into my rest.

6Seeing therefore it remaineth that some must enter therein, and they to whom it was first preached entered not in because of unbelief:

7Again, he limiteth a certain day, saying in David, To day, after so long a time; as it is said, To day if ye will hear his voice, harden not your hearts.

8For if Jesus had given them rest, then would he not afterward have spoken of another day.

9There remaineth therefore a rest to the people of God.

10For he that is entered into his rest, he also hath ceased from his own works, as God did from his.

15While it is said, To day if ye will hear his voice, harden not your hearts, as in the provocation.

16For some, when they had heard, did provoke: howbeit not all that came out of Egypt by Moses.

17But with whom was he grieved forty years? was it not with them that had sinned, whose carcases fell in the wilderness?

18And to whom sware he that they should not enter into his rest, but to them that believed not?

19So we see that they could not enter in because of unbelief.